If anyone has eyes, let him see!

If anyone has eyes, let them see', is the motto that the artist proclaims to the four winds, and before which pieces from the series that...
Catalog Plan your visit

Immanuel Kant trusted that Illustration would liberate the human being from it’s immature self guilt, centuries afterwards, the dependence on tutors and any creature who thinks prevails in the same ways that worried the revolutionary masses like the Aoidos from Classical Greece. The hierarchies, the classes and the abuse of all those who govern are some of the issues that Gustavo Díaz Sosa represents in his artworks, the bureaucratic purgatory in which the protagonists of his big canvases wander. Faceless people, only coded by their clothing and their wandering destiny, where walking away from the group leads to getting lost, but also to seeking shelter in its nucleus.

“If anyone has eyes, let him see!” is the theme that the artist proclaims to the wind, and to which works of the series that have been part of his discourse refer to, like “Of Bureaucrats and Godfathers” (“De Burócratas y Padrinos), “Epics of a New Millennium” (“Epopeyas de un Nuevo Milenio”) or “Hell, according to Dante” (“El infierno, según cuenta Dante”). A continuity better explained and enriched by his personal experiences, the necessity of transmitting everything he’s learned from life.

Gustavo bets on an honest and symbolic communication, in which an invisible finger points to the traces of ideologies wandering around our reality. The highest expression of tutelage is the institution, being it of a political or religious nature, with his taste for labyrinths or the breaks in the train of thought, the individual initiative. The work of Gustavo Díaz Sosa is a challenge to that hierarchy in both a conceptual and formal way. Academic technique strives for visibility in his compositions and the artist attains that perfectly. Therefore, we find a conditioned perspective, of cinematographic character, wide and distant, so no voice can move further away from the speech that moves towards the infinity of present elements in each artwork.

Gustavo is a scene shifter that conditions formalism and knows how to take advantage of the distributive potential of hierarchization. Each one of his artworks is a Theogony where the deepest stratum is basically composition and the perspective is defining. It follows the atmosphere that permeates everything, the play of light and shadows. Gustavo trusts in the ‘accidents’ that take place during the process, for randomness and genius are always walking together on the track of romanticism. After the necessary exercises of rupture and healing, the training between potential and order, the formalist background gives ground to the stain full of tribulation.

“If anyone has eyes, let him see!” is a call to action, to grow up and regain the lost virtue of individuals in the hands of uncontrolled consumerism and the craving for possession. It is also a reflection on faith and its manifestations, spiritual and architectonical. The architecture no longer protects men and women. More likely – it dominates them. Each brick is a response to a question posed since time immemorial, some answered, many without response, all motivated by a desire for freedom present versus future promise. 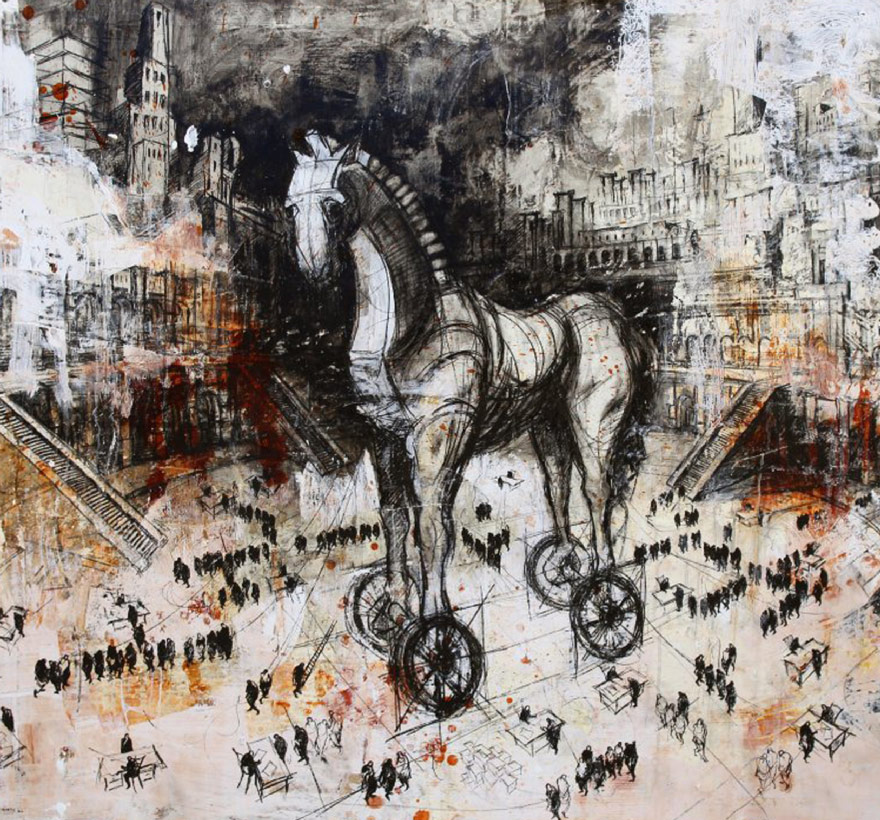 Gustavo Díaz Sosa
We use cookies on our website to give you the most relevant experience by remembering your preferences and repeat visits. By clicking “Accept All”, you consent to the use of ALL the cookies. However, you may visit "Cookie Settings" to provide a controlled consent.
Cookie SettingsAccept All
Manage consent